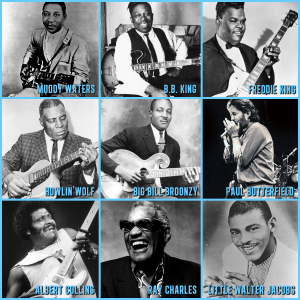 Boy, this one was a tough one… I sat down to put together a list of the songs that first got me into the blues, along with the ones that have had the most impact on my development as a musician. I really wanted to narrow it down to 10. And as you might imagine, that wasn’t particularly easy.

My very first exposure to the Blues (with a capital B) was hearing the Paul Butterfield Blues Band‘s recording of “Walkin’ Blues,” way back around ’67 or so. My older cousin, the late Jim Horner, was in a band that played some blues and soul music, and his band mate, Preston “Perky” Harrison was the guy who turned me on to Butterfield. Before that day, I had never heard anything as soulful as that harmonica, and it launched my into the blues orbit that I occupy to this day.

In any case, here they are – in no particular order – the ten blues songs that have had the most impact on my development as an appreciator of the blues, and as a blues artist:

Of course, Muddy gets “two” in this list, as well he should… even if Willie Dixon actually wrote many of the songs that Muddy is known for. And, the list of songs – and artists – that these tracks led me to is infinitely longer, and covers a wider range of styles. But these were the ones that started it all, at least for me.

Here’s a Spotify playlist with all 10 songs (by 9 different artists):

So, how about you? What are some of your favorites?