You are here: Home1 / Blog2 / Darren Watson – Getting Sober for the End of the World | Album Review... 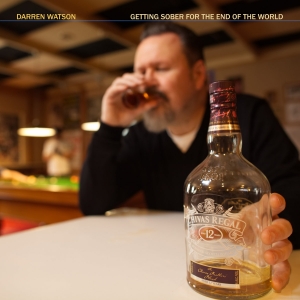 Darren Watson: Getting Sober for the End of the World

Back in the late 80s, New Zealand-based Darren Watson was the principal songwriter and front-man for “Chicago Smoke Shop” (later known as just “Smoke Shop”). They made a couple albums, had some decent radio exposure, and were able to secure a place in the hearts of New Zealand’s music fans. They earned multiple nominations for various NZ Music Awards, and shared stages on NZ tours with such international artists as Koko Taylor, Robert Cray, George Thorogood, and The Fabulous Thunderbirds.

Watson’s latest, Getting Sober for the End of the World, is his seventh release as a solo artist, and was recorded at Lamington Recording (AKA Watson’s home studio) in Wellington, Aotearoa. This latest record is a collection of 9 primarily acoustic performances and features Watson’s witty, timely songwriting, his accomplished acoustic fingerstyle and slide guitar, and his powerful yet understated vocals. And as with his previous releases, Watson is not afraid to speak out against injustices, great and small.

The title track, “Getting Sober for the End of the World”, with its New Orleans-y gospel feel (accompanied by a brassy trumpet and trombone chart) does a great job of conveying the mixed feelings we encounter from being caught-up in a world that’s in a constant state of turmoil. The humor in the lyric and the propulsiveness of his fingerpicked guitar only add to the levity of the track.

“Self Made” is a two-beat acoustic blues that takes great pleasure in skewering a pompous windbag “…with a poorly-cut suit and a fake suntan”… I wonder who he could possibly be talking about? Terry Casey’s energetic harmonica accompaniment channels Sonny Terry, and mates perfectly with the up-tempo feel of this track.

“Love that I Had” – Craig Denham’s accordion weaves sweetly in and out of this heartbreakingly bittersweet elegy to lost love. Watson’s vocal and his lyrical guitar break are absolutely perfect for conveying the feeling of regret and resignation, and I can easily imagine a young Ry Cooder covering this, back in the day.

“Ernie Abbott” is a mournful dirge that tells the story of the still-unsolved 1984 murder (by suitcase bomb) of a Wellington Trades Hall caretaker.

The swampy groove of “Allison Jane” features LA guitar slinger (and Mavis Staples’ musical director) Rick Holmstrom on tremolo guitar that provides a perfect accompaniment to both Watson’s acoustic and his vocal.

“One Evil Man” is another two-beat that takes direct aim at self-involved world leaders who are more concerned about their own well-being than the well-being of those they supposedly represent. Again… “to whom” could Watson possibly be referring?

The final track, a rollicking cover of Robert Johnson’s “Preachin’ Blues (Up Jumped the Devil)”, is a perfect way to close-out this impressive collection.

Musicians included Watson on guitar, vocals, percussion, bass, and organ, along with Delia Shanly on drums and percussion; Craig Denham on accordion, Steve Moodie on upright bass; Terry Casey on harmonica, Dayle Jellyman on piano; Rick Holmstrom on guitar on Alison Jane; and The Cold City Horns: Jacob Wynn on trumpet and Nolan Plunkett on trombone. Watson penned all the tunes with the exception of “Love That I Had” (Matt Hay), and “Preachin’ Blues” (Robert Johnson).

Watson’s approach to fingerpicking, while having definitely assimilated U.S. country blues styles such as the Piedmont or East Coast style and the Missipi Delta ragtime styles, is distinctly recognizable as his own. And the raw authenticity of Watson’s voice carries these songs with both force and subtlety.

This is a good-sounding record. The instrumentation and vocals are distinct, clear, and well-balanced, and the true test? It withstands repeated listening, of which I have taken full advantage. Watson’s compositions maintain a strong sense of melody, and his approach to lyrics is both straightforward and humorous. All in all, a terrific record!

While I really enjoyed Watson’s previous outing, Too Many Millionaires, I like this release even better! It’s an enjoyable collection of timely tunes, with great performances all around, highlighting Watson’s wonderfully accomplished yet never ostentatious guitar playing and his soulful vocals. If you’re a fan of country blues done they way they’re supposed to be done, do check out “Getting Sober for the End of the World. I loved it, and I think you will too!

Here’s his amusing YouTube video for the title track:

And you can check out and purchase the entire album (digital or physical) here on Bandcamp:
https://music.darrenwatson.com