My first electric guitar was a Harmony Rocket; a red-burst, with 2 gold-foil pickups and a poor excuse for a Bigsby vibrato tailpiece. It was a bolt-neck, with a rather beefy neck, and skinny frets. My parents bought it for me when I was about 12 or 13, a year after I had begun taking lessons from the local guitar teacher, Charlie Keintz. I guess he had some sort of distribution deal with Harmony, because they were displayed all over his teaching studio, which was in a second-floor loft above his small barn/garage. 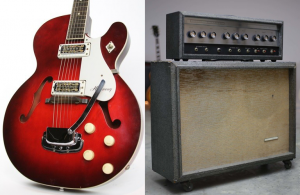 In time, I was able to purchase my first amp, a Silvertone Twin Twelve, with money I’d saved up from my paper route. Both proved to be serviceable instruments, but were most definitely considered to be lower-end “starter” instruments.

Nonetheless, this combination got me through my first steps to becoming a musician, and many performances with the fledgling garage bands of my early teen years. But it wasn’t too long before I saw others my age – and perhaps a bit older – performing with more desirable “pro” gear, which, in this case, meant Gibson and Fender instruments. Of course, they money I was pulling-in from my paper route was wildly insufficient for buying that kind of gear, especially “new.” So I was more than intrigued when a friend of a friend showed up with an early 60s Gibson Les Paul SG. My dream guitar, insofar as an older player in my cousin’s band had one…

This one, however, was sadly pristine. In fact, it was in pretty sad shape. The finish had been stripped, and the entire thing had been painted black, with latex house paint… using a 3-inch brush! It was butt-ugly. But it was a Gibson SG, and the electronics had not yet been molested, so for something like $250,I was able to score my first very Gibson!

Being an early iteration of the Les Paul SG model, the neck-to-body joint was a tenuous one, at best. In fact, it was downright wobbly! The guitar wouldn’t stay in tune for more than a couple of chords, and it was basically unusable. On closer inspection, you could actually see the cracks forming in the body on either side of the neck joint. And, it was only a matter of time before the neck snapped right off the body, and not in any way resembling a “clean break.” I was upset, to say the least.

Now, have little-to-no experience with musical instrument construction or repair, and not enough money to buy another guitar… or even to repair this one, I opted for a somewhat hare-brained “Plan B.” I was going to build a new guitar, with parts salvaged from this one.

Based on my then-rudimentary knowledge of woodworking, rejoining the neck to the body seemed impossible. There simply wasn’t enough wood there to ever restore a solid connection, which is why Gibson changed the neck-to-body joint on later models of the SG. So, I set out to make a new body, to which I would bolt-on the salvaged neck of the SG. There wasn’t enough wood on the end of the neck to make a proper heel, so i couldn’t envision any way to make a solid connection other than wood screws, as in a Fender-style instrument.

As much as I liked the SG shape, I decided to try something different. I had seen – and liked – the earlier, slab-bodied Les Paul Junior shape, particularly the double-cut version. So, acquiring some pattern-grade mahogany (a fairly thick slab, at least 2″ thick, but surprisingly light in weight. It was, after all, 40+ years ago), I cut-out a similar shape, and used sandpaper and rasps to soften the harsh edges. Taking measurements from the SG, I figured out the placement for the pickups, bridge, stop tail, and controls, and also determined the location, depth, and angle of the neck pocket. I didn’t have a router, so all of my routing was done using a couple of old chisels, and even some flathead screwdrivers. I simply didn’t know any better!

Eventually, I got the body to the point where it looked pretty good, and then it was time for the finish. A friend’s father worked in an auto body shop, and I was able to get him to grain-fill and spray an automotive-grade black finish onto the sanded and shaped body. When I got it back from him, I was absolutely amazed at how good it looked! So, on to assembly and electronics. I put the guitar together, and – after experimenting with a soldering iron to get the hang of it – wired up the pickups and controls. I had already stripped the black paint off of the back of the neck, and opted for some thin coats of lacquer, which I had buffed-out to a semi-gloss finish. After it was all assembled, and after some tweaks to the bridge, I was actually able to get decent intonation, and the guitar looked great. But better still, it sounded great! And so, it became my regular “gigging” guitar! One unlike any other!

Unfortunately, my enjoyment was short-lived, and only lasted until the end of my senior year of high school, in 1973. At that point, I was in a band, and a bunch of us had rented the upstairs of an old house alongside some railroad tracks, where we could rehearse, jam, and just hang out. The downstairs was rented-out to some motor heads, but we all got along pretty well. One afternoon in June, I was at my high school for rehearsal for graduation later that evening. And when I got back from rehearsal, the band house had been broken into, and my guitars, a couple of amps (including a stellar ’64 Super Reverb), my stereo system, and hundreds of my record albums were all gone! Needless to say, it put a damper on the evening’s festivities.

We were never able to discover who the culprit was, nor was any of the gear ever recovered. And to this day, I still don’t know how I was able to cobble-together a more-than-serviceable instrument from scavenged parts, without so much as a shred of knowledge of how to put together a guitar!